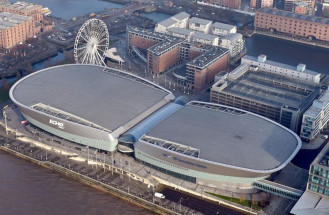 The M&S Bank Arena in Liverpool is now able to deliver energy efficient cooling to audiences of up to 11,000 thanks to the installation of 46 e-Series modular chillers.

In December 2017, the Arena’s carpark, where the previous chillers were housed, was devastated by a fire, and the new chiller solution needed to be installed in the limited space on and around the Arena itself.

The solution came in the form of cooling only 90kW e-Series modular chillers, which are providing energy efficient comfort cooling to the Arena & Convention Centre. The final design sees eleven units installed on each of the four roof plant decks and two chillers installed on a gantry within the loading bay.

The design for The ACC Liverpool Group’s systems was undertaken by Redworth Associates, taking advantage of the modular nature of the e-Series which allows for up to six units to be connected in a design which best fits any given space. With a capacity ranging from 90kW to 1,080kW, they provide space savings of up to 35% compared to traditional chillers.

Jim Goff, Senior Project Manager at The ACC Liverpool Group, saw the benefits that the e-Series chiller option could provide. He said, ‘‘The rooftop areas of the Arena and Convention Centre are very congested, but with the e-Series chillers being available in compact modular units, much smaller than traditional chillers, I was confident from the outset that this was the best approach to delivering a feasible solution.”

During the installation, the Arena benefitted from e-Series units being available for next day delivery, rather than with the usual 8-10 week lead time which is commonly required for traditional chillers, enabling the venue to reduce the costs associated with the hire of temporary cooling.

The units were installed during the winter months when cooling requirements were less in demand.

The chillers will also enable the site to meet high energy efficiency standards, reducing operating costs whilst benefiting from the extended warranty offered as standard with e-Series. With two inverter-driven compressors per module, the chillers have a wide operating range of between 8%-100% capacity, offering exceptional part-load efficiencies. As this range is where most chiller systems will operate for most of the time, this capability provides significant real-life efficiency savings.