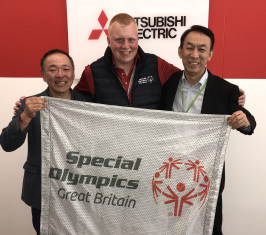 Mitsubishi Electric has announced that it will become a new official partner of Special Olympics GB for the next two years.

As the largest provider of a year-round, all ability, sports programme in Great Britain, Special Olympics GB supports over 10,000 athletes with intellectual disabilities on a continued basis.

“We are delighted to support the work this incredible body does to enable athletes to realise their full potential,” explains Itaru Watanabe, President of Mitsubishi Electric UK Branch. “Everyone makes assumptions about the limits of people with intellectual disabilities and we are pleased to help confound preconceptions and give these amazing athletes the chance they deserve.”