We all want and expect comfort in our modern lives and when we are spending our hard earned cash on entertainment, then we rightly expect to be entertained in some level of comfort.

So when one of Liverpool’s largest theatre, music and sporting venues lost its comfort cooling thanks to a fire in the council car park next door, the building owners were left with little choice but to fund temporary chiller systems.

Until they discovered the e-series range of chillers which have now been installed into the tight spaces on the roof of the building.

The general consensus was that the solution required just wasn’t feasible, but this is where the modular e-series came into their own.

The M&S Bank Arena Liverpool, which was formerly known as the Echo Arena, provides live music, theatre, sporting events and comedy performances to audiences of up to 11,000.

In December 2017, a huge fire devastated the car park adjacent to the arena, where the arena’s chiller system was housed, causing irreparable damage to the structure of the car park and damaging the chillers.

The car park has now been demolished and will be replaced with a new 1,650-vehicle capacity car park located elsewhere on the campus.  As a result, a new location for a chiller system was required.

When deciding on a solution, the owners of The ACC Liverpool Group, operators of the Arena, Convention Centre and their sister venue Exhibition Centre Liverpool, were faced with the challenge of limited space both on and around the arena for any new chillers to be located.

The Arena’s existing air handling units are housed in four small rooftop plant areas, but the narrow walkways around the AHUs did not offer sufficient space for a traditional chiller system to be installed.

The solution came in the form of 46 cooling only 90kW e-Series modular chillers, which are now providing energy efficient comfort cooling to the Arena & Convention Centre.

The final design sees eleven units installed on each of the four roof plant decks and another two chillers installed on a gantry within the loading bay.

He said, “After the fire, I was not only managing the installation of temporary chillers to cool the facility through the summer months, but was also trying to provide The ACC Liverpool Group with a rapid, permanent cooling solution.

“The general consensus was that the solution we required just wasn’t feasible, but we were confident that a solution could be engineered. As a result of my existing relationship with Mitsubishi Electric, I was familiar with their e-Series product as an off-the-shelf, modular and highly efficient product which could be delivered quickly and meet with our restricted space requirements”.

Being modular, the chillers can literally be connected together in multiples of 90kW and are provided with pipe jointing kits to link the modules together. 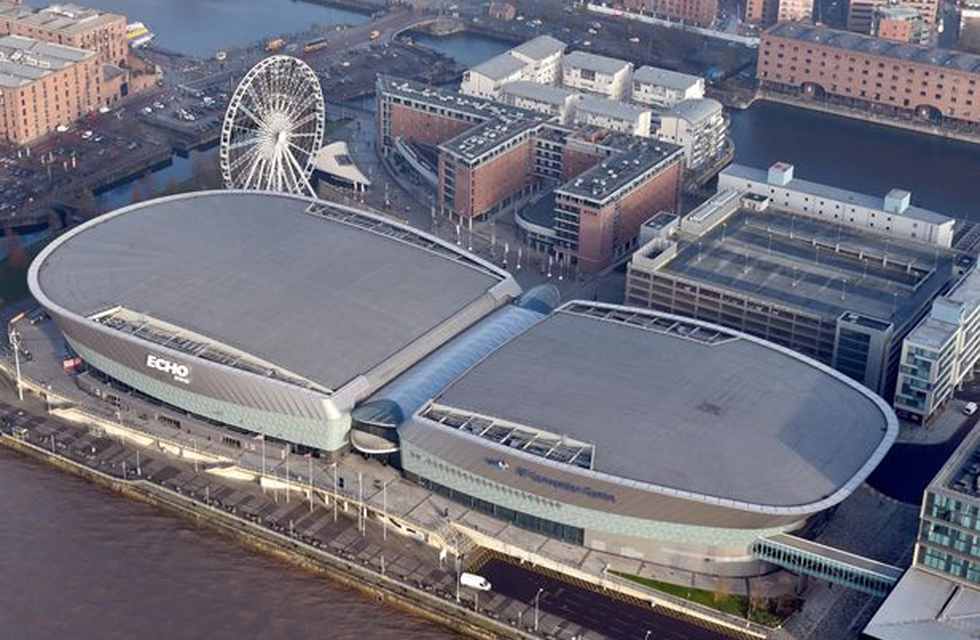 Even the smallest of spaces 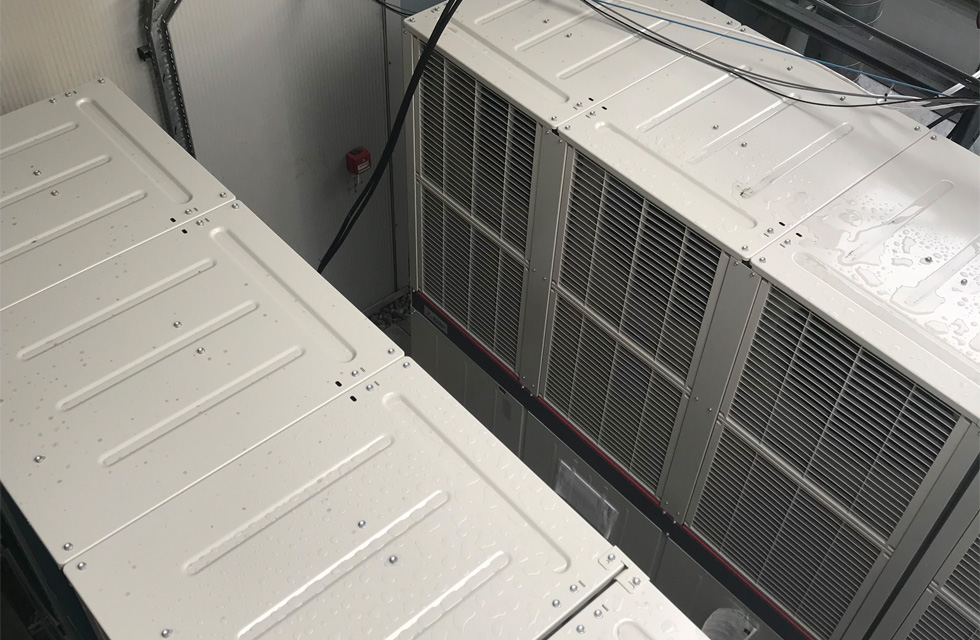 The modular e-series provides complete flexibility in installation and operation 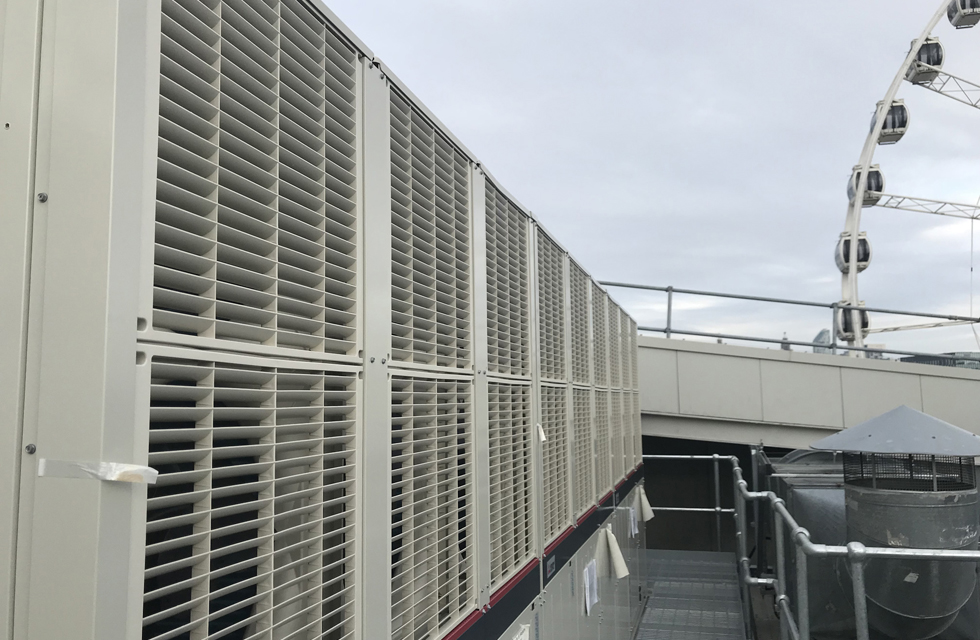 “Whilst this was an extremely large, complex and time critical project, the e-Series chillers gave us the ability to provide an exceptional solution,” said Adam. Jim Goff, Senior Project Manager at the ACC Liverpool Group.

‘‘The roof top plant areas of the Arena and Convention Centre are very congested, having only small and narrow strips of unoccupied space available to receive any new or additional plant. With the e-Series chillers being available in compact modular units, much smaller than traditional chillers, I was confident from the outset that this was our best possible approach to delivering a feasible solution.

“With the assistance and expertise of our FM service provider ENGIE and their Projects division, an outline proposal was taken through to design and was installed during the winter months when cooling was least required.”

With the modular nature of the e-series allowing for up to six units to be connected in a design which best fits any given space and with a capacity ranging from 90kW to 1,080kW, they can save up to 35% of space compared to traditional chillers.

In addition, their design also allows for horizontal air discharge, so they could be mounted above one another in the tight space, or in aisle facing strings of chillers.

The detailed design for The ACC Liverpool Group’s systems was undertaken by Redworth Associates. Another key consideration for installing the e-Series units is that they are typically available for next day delivery, rather than the usual 8-10 week lead time which is commonly required for traditional chillers.

Mitsubishi Electric’s approach in supporting the customer meant that the 46 chillers could be supplied in line with the project timeline, providing phased deliveries to coincide with the construction requirements, enabling the venue to reduce the costs associated with the hire of temporary cooling.

The chillers enable the site to meet high energy efficiency standards, reducing operating costs whilst benefiting from the extended warranty offered as standard with e-Series.

With two inverter-driven compressors each, the modules have a wide operating range of between 8%-100% capacity offering exceptional part-load efficiencies.

As this range is where most chiller systems will operate for most of the time, this capability provides significant real-life efficiency savings.

Carole Titmuss is publisher and editor of Refurb Projects magazine

We need a radical change in how we build quality homes

Shh, can you hear this quiet revolution?